Greek men have their own special way to approach a woman. They are very effusive with girls and they are famous as “Greek Lovers”…

How they charm you, making you feel like the most beautiful woman in the world! Theres even a name for this game of charm they play so well, its called “kamaki,” the harpoon used to catch a fish in one deft stroke…

If you are determined to get involved with a Greek man, there are several rules you should follow:

Well cooking: To most Greek men, a woman’s place is in the kitchen and if you can find the key to his stomach, you will have no problem unlocking the key to his heart. Although it goes without saying that your cooking will never match up to his mother’s culinary skills, being a whizz in the food department will definitely get his tongue drooling. Love their family: They say that behind every great man, there is a great woman. Well, behind every Greek man is his mother. And his father, brother, uncle, sister, cousin, nephew, god-son, best friend, and anyone else who has known him for longer than you. Greek men are notoriously close to their mothers, so creating strong ties with your potential mother-in-law is very important.

Respect his opinion: Greek men can be easily offended, so don’t ever try to make fun of them, especially on your first few dates. If he asks you for your opinion on something, be sure to agree with him and voice any differing ideas very subtly and with great caution. Avoid any comment that might threaten his ego. 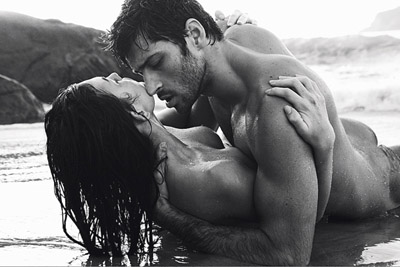 Be a woman: Greek men tend to be very traditional and at the end of the day… remember that he is the MAN and behave like real woman… Greeks want a woman who will tend to them, love them, look after their children, cook them nice meals and keep their bed warm. They don’t want a woman who shows she can outdo a man.

Be attractive and take care your appearance: Greeks like sexy women. Men are very visual creatures and Greek men in particular take great pride in showing off their shiniest, glossiest, most expensive belongings. In the early wooing stages, try to combine sexy with smart but don’t go too over the top. When you get to the ‘going out’ phase, you may dress as provocatively as he likes, but if you go out alone or with girlfriends, you should don a nun’s outfit.

And remember that you will have to keep all this up for the rest of your life. But it’s a small price to pay for the love of a “Greek God”…  😎  😎